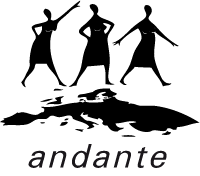 At the General Assembly, April 2008 in Sion, the delegates had expressed their wish to have a common prayer for Andante. Wishing to be sure that the prayer would really voice the feelings of the Andante members, the Coordinating Committee requested the help of the Swiss theologian Jacqueline Keune. She suggested that a questionnaire be sent to the member organisations asking them to answer very specific questions. In this way they could express their joys and fears, their successes and disappointments, their ideas and visions in and for their organisation’s work, and for Andante. The replies had been gratifying. Starting with these responses, Jacqueline Keune composed a prayer in German. The English and French translations had been completed in time to be read during the Eucharist celebration at the end of the Assembly in Strasbourg. A Dutch and Slovak translation are already available, other translations are in hand.

Listen to the prayer in 8 different languages.